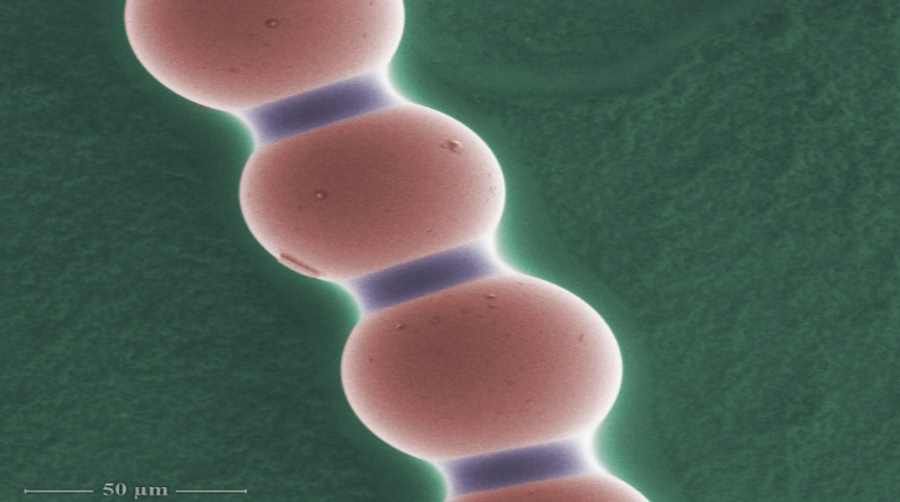 Poles have discovered a new phenomenon. Semi-fluid chains pulled from a sea of microparticles

From a liquid containing microparticles, surprisingly long chains of particles can be extracted using an electrode. The cells of these chains are bonded together by a surrounding thin layer of liquid. This spectacular phenomenon was discovered with the participation of Polish researchers and described in the prestigious journal Nature Communications".

The electrode is slowly moving away from the surface of the liquid. Behind it, one by one, more spherical particles are pulled out, still a moment ago distributed chaotically in the colloidal solution of the. A long, regular chain of microparticles spontaneously forms over the liquid – a phenomenon never before observed.

Although the discovery is fresh, it seems that the attractive properties of colloidal and granular chainoIn will be quickly used. Work is already underway to use the phenomenon to produce thin, conductive structures deposited on substrates with rotion of roughness and properties. The structures could be elements of e.g. elastic systemsoin electronic. Potentially, chains could also be formed from live comorek, which would open the way to possible biotechnological or even medical applications.

– Probably everyone had the opportunity to see at his mother or grandmother’s necklaces of beads strung on a thread. Chains of microparticles, produced and studied by our teamoThey are very similar to them in appearance, but are much smaller in size. The most interesting thing, however, is the physics at work here. A team is responsible for the formation of these regular structuresoł not at all trivial phenomena, and the role of the thread connecting the individualolne particles fully. liquid. What’s more, the thread in the necklace passes through the centers of the beadedow, while our thread, or liquid, surrounds the microparticles – mowi Dr. Filip Dutka (FUW).

– The discovery of the phenomenon itself – to which the experiments conducted at the Institute of Physical Chemistry of the Polish Academy of Sciences had come about – was quite accidental,” recalls Dr. Zbigniew Rozynek, head of theowny author of a publication in the journal „Nature Communications”, Currently working at the Faculty of Physics of the Adam Mickiewicz University. – With the help of an electrode under a voltage of several hundred voltsow studied glass microbubbles floating on the surface of oil. At one point, I took the electrode out of the liquid and was surprised to notice a long, very regular chain at the end of it, ktory when viewed under the microscope turned out to be the thickness of a single speck,” he adds.

– Materials produced by the Czochralski method are crystals, i.e. substances with a regular structure in each of the three dimensionsoin spatial. We make our structures not from an atomoin or molecules, but from microbeads arranged regularly in only one dimension. With a certain degree of conventionality, then, our chains can be treated as crystals, only that they are one-dimensional – moDr. Rozynek.

How to build a colloidal chain? Just take a vessel with a non-conductive liquid, add spherical and conductive particles, mix the whole thing. When we approach the electrode to the suspension prepared in this way (e.g. in the shape of a needle), its end will attract ktohare ball. Since this one conducts electricity, it becomes an extension of the electrode. With an appropriately selected voltage value, it becomes possible to pull ball after ball out of the liquid, resulting in the formation of a chain of particles surrounded by a layer of liquid. Between each pair „links” The liquid forms a capillary bridge, attracting neighboring particles to each other. Electrical contacts are then formed that are constant over time. Thanks to them, current flows through the entire chain almost roas efficiently as by a single speck and, as a result, the last attached sphere is able to attract another one from the solution.

– In a formed chain, capillary bridges, shaped like an hourglass, are located between all subsequent beads. When the voltage is turned off, their role even becomes crucial: by attracting the balls to each other, they are responsible for holding the chain together. And since the capillary bridges are simply liquid, the formed chain remains a very flexible structure, explains Dr. Dutka.

– Once formed, our microparticle constructs behave just like chains: they are flexible and can be bent into roticular shapes. However, a lot depends on the type of liquids used. In someoIn other experiments, we extracted chains from melted paraffin. Moments after pulling out, the bridges solidified and the whole thing stiffened. An intermediate variant is also possible. If we take e.g. resin-alcohol mixture, after evaporation of the alcohol the resin will thicken. The chain will then lose a lot of flexibility, but it will not be completely rigid, notes Dr. Rozynek.

Chain lengthoin colloidal depends on the number and weight of microparticles, which is usually closely related to the size of the latter. Polish researchers, funded by a grantoat the National Science Center and the Foundation for Polish Science, conducted experiments for particles with diameters ranging from approx. 100 nanometersow to 200 micrometerow. Chains made of micron-sized particles numbered up to several thousand elementsow and reached a length of several centimetersow.