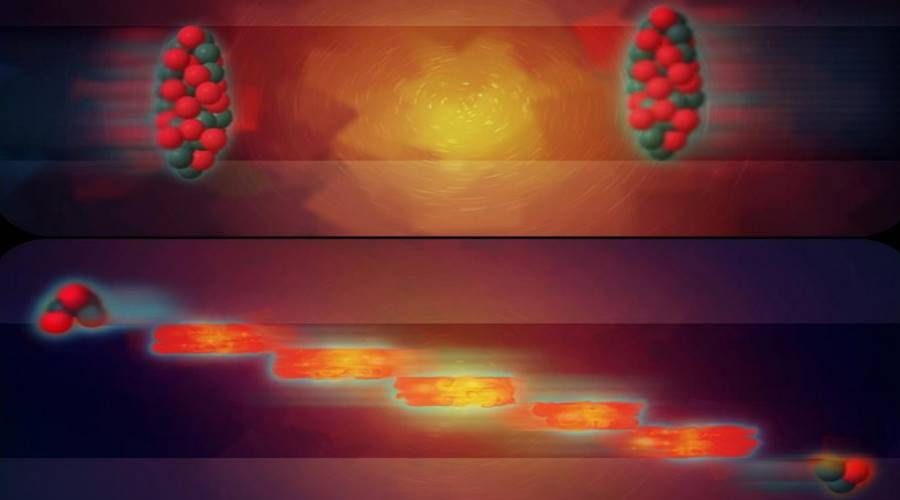 In collisions of atomic nuclei, “fiery streaks” are formed

From the theoretical considerations of physicistsow from the Institute of Nuclear Physics of the Polish Academy of Sciences in Krakow, Poland, show that after a collision, this plasma blurs into streaks along the direction of the collision, moving faster the farther they are from the collision axis.

The model, its predictions, and the results of their confrontation with existing experimental data are presented in the journal „Physical Review C” – reported IFJ PAN.

Collisions of atomic nuclei occur extremely fast and at distances counted in just hundreds of femtometersow (that is, in hundreds of millionths of one billionth of a meter) of the. The physical conditions are extremely sophisticated and direct observation of the course of the phenomenon is not currently possible. In such situations, science copes by constructing theoretical models and confronting their predictions with data collected in experiments. In the case of the collisions in question, however, a huge complication is the fact that the resulting conglomerate of particles is a quark-gluon plasma. Interactions between plasma particles are dominated by strong interactions and so complicated that wspoModern physics does not cope with their strict description.

– Our group decided to focus on electromagnetic phenomena occurring during collisions, since they are much easier to express in the language of mathematics. As a result, our model turned out to be simple enough that we could without much troubleoin could take advantage of the principles of conservation of energy and momentum in it. PoLater we found out that despite the simplifications adopted, the model’s predictions remain at least 90 percent. consistent with experimental data – mowi dr hab. Andrzej Rybicki (IFJ PAN).

As described in the communication, the massive atomic nuclei accelerated to high speeds, observed in the laboratory, due to the effect of theow resulting from the theory of relativity flatten in the direction of motion. When two such proton-neutron „cakes” are coming towards each other, colliding on the ogoł is not central: only part of the protonoin and neutronoin one nucleus hits another, interacting violently and forming a quark-gluon plasma. At the same time, someore external nuclear fragments „plackow” do not encounter any obstacle on their way and continue unhinderedocony flight; in the jargon of physicistow are called observers.

– Our work was inspired by data collected in earlier experiments with nuclear collisions, m.in. in the SPS (Super Proton Synchrotron) gas pedal. Of the effects we examinedoin the electromagnetic effects occurring in these collisions showed that the quark-gluon plasma moved at a higher velocity the closer the observerow is located – mowi Dr. Rybicki.

To map such a course of the phenomenon, the Krakow physicists decided to divide the nuclei along the direction of motion into a series of lanesow – „bricks”. Thus, each nucleus in cross-section looked like a pile of bricks stacked on top of each other (in the model their height was one femtometer). Instead of considering complex interactions involving strong interactions and intricate momentum flowsoin and energy between hundreds and thousands of derived particles, the model reduced the issue to a few tens of rownolegal collisions, with which theorych each occurred between two proton-neutron bricks.

The predictions of the model were confronted by scientists from the IFJ PAN with data collected for collisions of massive atomic nuclei during the NA49 experiment at the SPS gas pedal . The collider is located at the European Organization for Nuclear Research’s CERN facility near Geneva, where its most important tasks currently include accelerating particles shot inside the LHC gas pedal.

– Due to the scale of technical difficulties, the results of the NA49 experiment are subject to measurement errors that are difficult to reduce or eliminate. In reality, therefore, the accuracy of our model may be even higher than the mentioned 90 percent. This entitles us to conclude that even if some additional, as yet unaccounted for physical mechanisms are at work in collisions, they should no longer significantlyob affect the theoretical skeleton of the model,” comments Miroslaw Kielbowicz, a PhD student at IFJ PAN.

After the development of the collision model „brick pilesow”, researchers at the IFJ PAN discovered that a very similar theoretical construction, referred to as the fire plume model, had been proposed by a group of physicistsow from Lawrence Berkeley Laboratory (USA) and Centre d'Etudes Nucléaires de Saclay (France) – and it was already in 1978.

– An ancient model of fire streaks, o ktohe model, mentioned in our publication, was built to describe other collisions occurring at lower energies. We created our construction independently and for a different energy range – points out prof. dr hab. Antoni Szczurek (IFJ PAN, University of Rzeszow) and stresses: the existence of dwoch independent models, based on a similar physical idea and giving good agreement with measurements in roof different collision energy ranges, increases the likelihood that the physical basis on which theowhich these models were built, are correct.

The Krakow fire plume model provides new information about the expansion of quark-gluon plasma in high-energy collisions of massive atomic nuclei. The description of the course of these phenomena will be further developed within the framework of another international experiment, SHINE, ktory has already started on the SPS gas pedal – announced in the announcement.

The research of the group from the IFJ PAN was funded by the SONATA BIS grant of the National Science Center.

In the photo, fragments of extremely hot matter, produced in a collision of heavy atomic nuclei at the SPS gas pedal at Europe’s CERN facility, move away from each other at high speeds forming streaks along the direction of the collision.